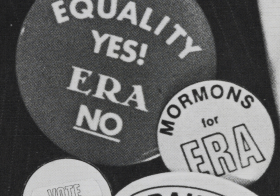 While to all outward appearances we had nothing to complain of, the first meeting was an impassioned exchange of frustrations, disappointments and confessions. We had expected some serious confrontations because all attending are not in…

Church and Politics at the IWY Conference

During the spring of 1977, Utah’s two major newspapers began their coverage of what was to become one of the hottest political controversies of the year: the Utah Women’s Conference authorized by the National Commission…

I smiled wryly at the cartoon on the stationery. The picture showed a woman standing before an all-male ecclesiastical board and asking, “Are you trying to tell me that God is not an equal opportunity…

Mormon Women and the Struggle for Definition

I am sensitive to that steadying hand as I attempt to identify and define what for an earlier generation of women identified and defined them as women—their relationship to the Church.

The Pink Dialogue and Beyond

Some time in June 1970,I invited a few friends to my house to chat about the then emerging women’s movement. If I had known we were about to make history, I would have taken minutes…

I would like to discuss teh social experience of historical Latter-day Saint single women in the context of five questions: (1) Does she have an acceptable reason for being single?

Women in the Mormon Church are encouraged toward traditional roles and attitudes that discourage personal, familial, and societal change. The ideal female role is that of a non-wage-earning wife and mother in a nuclear family…

LDS Women and Priesthood: An Expanded Definition of Priesthood: Some Present and Future Consequences

In seeking to predict what might occur in the Church if priesthood were extended to women, it is helpful to focus attention on some of these organizational dynamics.

While an examination of that history leaves unanswered the question of women’s ordination to the priesthood, the historical overview of LDS women’s relationship to priesthood suggests a more expansive view than many members now hold.